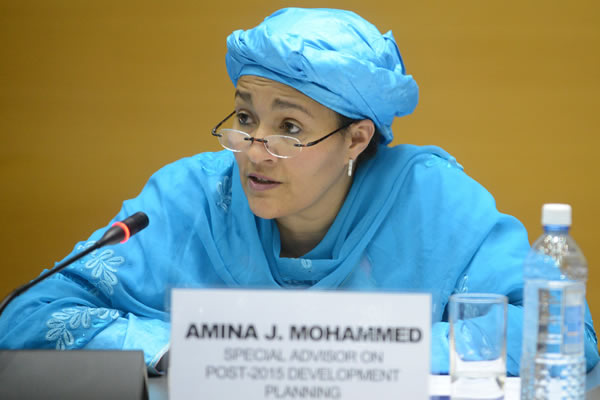 Like other laudable projects of the past, the Federal Government’s N9.2bn clean cookstoves project, which would have Nigeria’s drive towards cleaner environment, is again stuck in legal conundrum and bureaucratic controversies that may ultimately mar its objectives. In this report by Olufemi Adeosun, stakeholders are urging the Environment Minister, Mrs. Amina Mohammed, to intervene in the stalemate with a view to ensuring the implementation of the project.

In Nigeria, a good number of women, particularly those in the rural areas suffered untold hardship in the process of cooking for their children and for their husbands. While the simple act of cooking is supposed to be a pass time for women, it has resulted in various ailments for many who rely on traditional wood sticks. For instance, the World Health Organisation,(WHO)in its latest report put the number of women that die annually in Nigeria as a result of smoke from cooking at 95,000. Besides, the nation is also said to lose 3 per cent of its forest cover annually due to felling of trees for domestic uses. It was in a bid to address the drift that the then President, Goodluck Jonathan’s administration came up with National Clean Cookstoves Scheme initiative.

In order to push through the programme, the Federal Executive Council, FEC, in 2014, approved N9.2 billion for the procurement of 750,000 units of clean cook stoves as well as 18,000 wonder bags for the rural women across the six-geo political zones. Although, stakeholders in the environment sector expressed concerns over it, claiming that it was a white elephant project aimed at frittering away tax payers’s money rather than a genuine concern for the plight of rural women dying and contacting terminal ailments as a result of cooking with wood stoves. As if to justify the stakeholders’ concern over the scheme, no sooner than the implementation commenced that it was enmeshed in controversies.

While the Ministry of Environment, the ministry handling the implementation of the project, accused the contractor, Intergra Renewable Services Limited, of flouting the contractual agreement and threatened to revoke the contract, the firm quickly outsmarted the government by filing a court case to stall the impending contract termination. And that has since stalled the implementation of project. It would be recalled that Integral Renewable Energy Services Limited had in June 2015, secured an ex-parte injunction, restraining Federal Government from terminating the contract, alleging that government had breached certain aspect of the contract.

They said, rather than distributing cook stoves, government should have given out the money in form of soft loans to the players in the clean cook stoves sector to boost local production. However, information gathered from the ministry indicated that while the Federal Government approved N9.2bn for the implementation of the clean cookstoves programme, only N5 billion was released to the ministry. Also, it was gathered that before the ministry threatened to revoke the project, the sum of N1.2bn, being 15 per cent of the cost was said to have been paid to the contractor handling the project.

Commenting on the stalemate that has attained the project, the Chief Executive Director, Connected Development and Co-founder, “Follow the Money”, Mr. Lawal Hamzat, said it was sad and worrisome that such a programme which would have given succour to thousands of rural women was allowed to degenerate to court case. While calling for the early resolution of the impasse, he urged the new minister to initiate peace move with the contractor in the interest of the masses to whom the project was initiated. He said: “It is worrisome and sad to see no progress almost two years after funds disbursed to provide alternative and safer cooking energy for rural women.

According to World Health Organization (WHO), 95,000 women die annually in Nigeria due to smoke from cooking in Nigeria where we lose 3% annually of our forest cover. “I strongly believe that with dialogue between the Ministry of Environment and Intergra Renewable Energy Services Limited together with other key stakeholders, we could broker a sustainable solution where transparency and accountability would be key to ensuring service delivery to affected rural poor. “Would the new minister of Environment, Amina Mohammed be our super hero to champion this? I see a great opportunity where Madam Minister can call all parties involved to a round table to discuss issues surrounding the controversial contract, release of funds and work out an agreeable way forward rather than waiting for a court ruling which may not happen soon.

While calling on the review of the contract award, Hamzat called on the minister, Amina Mohammed to publish a full disclosure of all payments made to Intergra Renewable Energy Services Limited for the procurement and also work out modalities for the involvement of all relevant stakeholders in the implementation of the programme. “The current Federal Executive Council (FEC) led by President Mohammadu Buhari needs to show leadership and build confidence beyond committing to addressing issues surrounding climate change in Nigeria, Sub-Saharan African and being a party to the United Nations Framework Convention on Climate Change (UNFCCC).

The N9.2 Billion Clean Cookstoves contract has to be quickly resolved in the interest of the rural women, who are the target of the initiative,”he added. According to him, resolving the stalemate would not only help to send a positive signal to the private sector and international communities, but also provide the opportunity to put Nigeria on the priority map of the Alliance for Clean Cookstoves. “The alliance has committed $413 million to fuel the growth of the clean cookstoves sector, improving alternative cooking energy and introducing more renewable energy services for rural poor,” he stated. He noted that this would in turn build a strong market based value, create sustainable jobs for young people and empower rural women.

An Abuja based environmental rights activist, Aisha Ibrahim, in her view believed that the decision to propose importing cookstoves rather than providing the right environment for the growth of cookstoves market, was in itself, misplaced. According to her, there is basically nothing to justify in the project other than the fact that government, at that time, was trying to create business for its cronies and political allies. She stated,”When we learnt of the plan by the federal government to spend N9.2bn on the procurement of cookstoves and wonder bags to ameliorate the suffering rural women undergo on a daily basis in their bid to feed their families, some of us were skeptical about the workability.

While there is no doubt the fact that a lot of rural women suffer untold hardship in the process of discharging the domestic responsibilities, we certainly believe investing such a huge fund in procuring cookstoves is disguising the real intention. “We had argued then that if government was sincere in addressing the plight of the rural women, it would have created the right environment for growth of cookstoves market, encourage local production and come of with various incentives to encourage people to invest in the sub-sector.

Now we are justified in our opposition to the project because, the prevailing fall in the value of the Naira is not only constituting a blight on its implementation, the ongoing intractable court case means that the beneficiaries would have to wait in vain for the stoves that will not come. She argued that rather than distributing cook stoves, government should have given out the money in form of soft loans to the players in the clean cook stoves sector to boost local production. On the way out, Ibrahim, said since some amount had been paid to the contractor and some stoves delivered, government could not back out of the project. “I think the best way out is for the new minister to immediately begin the process of amicable settlement of the impasse.

First, she must go for out of court settlement with the contractor with a view to sitting down together to address the grey areas in the contract. Also, the minister should also convene stakeholders’ meeting where deliberations will be held on the best strategies to be employed to develop the nation’s cookstove market,” she added. Also, the Nigerian Alliance for Clean Cook stoves at a forum in Abuja has expressed its deep concern over the implementation of the scheme. A communiqué issued at the end of the meeting with partners cutting across public and private sector had noted that “partners of the Alliance are worried that controversies created by alleged lack of transparency and accountability in the award and implementation of the N9.2 billion projects, would damage the reputation of the emerging clean energy industry.

The communiqué read in part, “Further, we are also concerned that the initiative focuses on the importation of stoves that can easily be produced by Nigerians. By investing this money in Nigeria, we could have created thousands of new jobs and supported new and existing small businesses. “Given the current controversy surrounding this contract, the Nigerian Alliance strongly recommends that the Federal Government invest the remaining N7.3 billion of this contract into domestic clean cooking energy production and distribution. “These funds should go to soft loans, working capital and machineries, grants for training and capacity building as well as public awareness.

Meanwhile, a document obtained at the Federal Capital Territory, High Court 4 where the case is being held between the federal government and the contractor, Intergra Renewable Energy Services Limited, indicated that parties to the case had adopted addresses and the case adjourned sine die to enable the judge give final verdict. A reliable source in the court told our correspondent that although, Justice Baba Yusuf, the presiding judge in the case may give judgement any moment from now, that would not be the final take on the matter.

According to him, either side may decide to appeal the court judgement which will not be in the good interest of the rural women for whom the scheme was designed. The source said,”I can confidently tell you that there will be judgement in the matter any moment from now. However, this may not be the end of the matter, except parties to the dispute decide to settle out of court. Either said may decide to go to the appellate court in the case of unfavourable judgement and in all of this, it is the beneficiaries of the scheme that will suffer.”