Senate President commits to Clean Cooking Energy for All 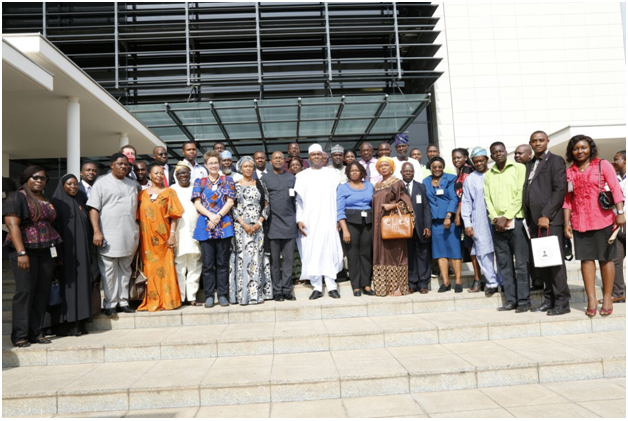 The President of the Senate, Senator Abubakar Bukola Saraki has assured Nigerians of the Senate’s commitment to universal access to clean cooking energy in Nigeria. He made the declaration while hosting the members of the Nigerian Alliance for Clean Cookstoves who paid him a courtesy call.

In his remarks, the National Coordinator of the Nigerian Alliance for Clean Cookstoves, Mr Ewah Otu Eleri told the audience that over ninety-five thousand Nigerians, mostly women and children, die annually as a result of smoke from the kitchen. According to Mr Eleri, “smoke from the kitchen is the highest killer of Nigerians, after malaria and HIV/AIDS. Cooking should not kill”, he told the senators. He urged the Senate President to support the goal of ten million clean solutions delivered to Nigerian households and institutions by 2020. In his submission, “Nigeria has all it takes to achieve universal access to clean cooking. Our country is one of the world’s largest producer and exporter of cooking gas, known as LPG. Despite that, only about five percent of households in our country use cooking gas”, Mr Eleri said.

Other speakers included Mr Daniel Isiocha, a manager with a leading LPG company, Techno Oil Limited. According to Mr Isiocha, Techno Oil is currently constructing a cylinder manufacturing plant in Lagos and has just commissioned the building of a gas terminal. He lamented that the switching cost to LPG is very expensive. He urged the Senate President to support the use of part of the current spending on kerosene subsidies for LPG. According to Mr Isiocha, this will lower the cost of LPG and ensure more Nigerians have access to clean cooking fuel that is produced locally.

In another address, Mr Musa Raymond, the Managing Director of Musa Raymond Nigeria Limited told the audience that he produces about half a million clean cooking stoves annually. “With better access to finance and stronger demand, especially from government-owned facilities such as schools and prisons, my company can produce millions of stoves and employ more Nigerians”, he to the Senate President. According to him, access to finance is the biggest challenge.

Addressing the Senate President, Adako Kwanashie, a clean clean cookstoves entrepreneur based in Kaduna State told the story of his small stove producing company. “I employ five local artisans, mostly potters and metal workers. If the government had facilitated more demand for our products, for instance through an awareness campaign, we will sell more stoves and can employ up to one hundred young people”. He told the Senate President that small clean cooking businesses require a supportive policy environment to expand the market for cleaning cooking in the country.

In his response, Senator Saraki assured the Nigerian Alliance delegation that clean cooking was close to his heart. “As the Senate, we shall step up actions to expand access to clean cooking. It is a fact that apart from saving lives, the use of clean cookstoves would also help to create jobs for our people. We are particularly happy that the Nigerian Alliance for Clean Cookstoves is focusing on made in Nigeria cooking solutions”, he said.

Senator Saraki promised to work with his colleagues in the Senate to explore opportunities to use legislation to expand access to clean cooking energy in the country. He and his colleagues will work to promote made in Nigeria clean cooking products. In conclusion, he urged the Chairman, Senate Committee on Environment, Senator Oluremi Tinubu to sit with the Nigerian Alliance for Clean Cookstoves to determine the kind of actions the Senate can take to support the important goals of the Alliance.