How a Solar Grill Could Change the World 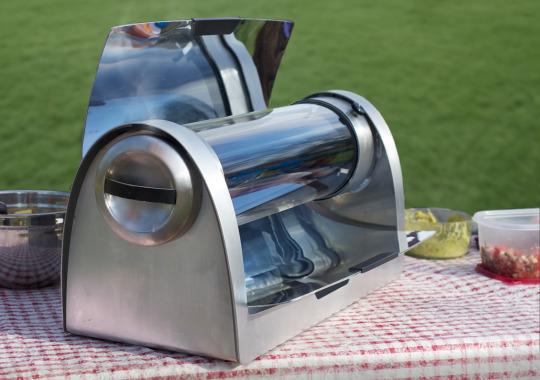 One day in 2001, GoSun founder Patrick Sherwin found himself precariously perched on the roof of a customer’s house. He’d been hired to remove a solar-powered water heater that had been installed in the mid 1980s, but sprang a leak not long after. “It had been pretty revolutionary at the time,” Sherwin told Yahoo Food, although he reasoned it was little more than a hunk of junk by then. Or so he thought.

Sherwin was astonished to find that although the heater leaked, its empty water vessels still collected heat — up to 500°F. That’s hot enough to cook something, he realized. So Sherwin climbed down, retrieved a couple hot dogs, clambered back up, and threw them in the heater. They cooked perfectly.

Sherwin now calls the hot dog experiment his “moment of aha” that sparked several years of tinkering with hot water collectors. Five years ago, he developed the GoSun Sport, a small, portable, solar cookstove. It’s useful for camping trips — the thing only weighs seven pounds, and cooks enough food for a hungry couple — but Sherwin wanted a bigger contraption that could quickly feed a large family.

He took to Kickstarter with the idea: the GoSun Grill, which has five times the GoSun Sport’s capacity and can serve up to eight people at a time. The campaign still has 27 days left to go, but it’s already raked in $322,424 — more than double Sherwin’s original goal.

Sherwin admits, however, that the 20-pound GoSun Grill is really only a grill in name. “It does better at baking. You can stew or steam. You can do some stir-frying. The only thing you can’t do is sear — you can’t get it hot enough so that it blackens.”

You can, however, bake a frittata, steam corn on the cob, or even roast two whole chickens. The grill performs well even on a cloudy day, and with an optional thermal battery add-on, at night, too.

image
But GoSun isn’t just a commercial venture. Sherwin attributes the project’s Kickstarter success, in part, to its social mission: GoSun is partnered with the Global Alliance for Clean Cookstoves, a nonprofit that aims to supply the world’s poor with 100 million cookstoves by 2020. Solar-powered stoves could change lives by eliminating the need for pricey wood, charcoal, or propane, Sherwin said.

He noted that in some parts of the world, young girls are tasked with collecting firewood for their families’ kitchens, an arduous task that can take many hours a day. These girls are often denied an education as a result. “It’s a cycle of poverty,” Sherwin said. “That’s really what we’re up against. That’s what we’re trying to break.”