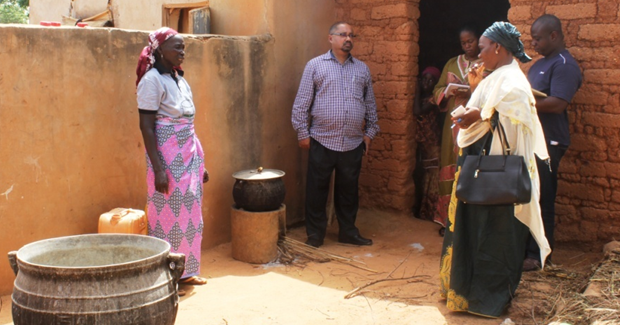 The Global Alliance for Clean Cookstoves is providing financial support to the International Centre for Energy Environment and Development (ICEED) to expand access and create the market for clean cookstoves in Katsina State, North West Nigeria. This support is coming under the umbrella of the “Farmer Managed Renewable Energy Production Project” in Katsina State.

Katsina State is in the sahel savannah region and therefore seriously exposed to desertification. This exposure is exacerbated by increased land degradation and destruction of environment as a result of agriculture and the quest for firewood. In recent years, the quest for firewood has been identified as one of the major causes of forest depletion in the state. Accord to Nigeria’s Bureau of Statistics, 90.5% of households in Katsina State depend primarily on firewood for cooking using traditional firewood stoves.

To ensure this overdependence on firewood is significantly reduced and increase the wood lot in the state, ICEED in partnership with OXFAM Nigeria and with support from the European Union, Global Alliance for Clean Cookstoves and Nigerian Alliance for Clean Cookstoves embarked on this project. The project which seeks to simultaneously increase fuelwood supply and decrease fuelwood demand is being implemented in Mashi, Daura, Zango, Mai adua, Sandamu, Dutsi and Baure LGAs of the state for a duration of four years (2014-2018). The project has two (2) main components – Agro-forestry component that seeks to plant and/or maintain at least 5.5 million trees, and Fuel Wood Reduction (FWR) Cookstoves component which seeks to create the market and distribute at least 35,000 stoves. Oxfam is responsible for the delivery of the Agro-forestry component while ICEED is charged with delivering the FWR cookstoves component.

The project completed its First Implementation Year in September, 2015. The following achievements were recorded by the clean cookstoves component of the project in its first year of implementation:
1. Establishment of 4 FWR stoves training and production centres. The centres consist of training shades, store rooms and kilns. Ownership and management of the centres are the responsibility of the entrepreneurs which the project has trained and will train.
2. Introduction of two stove models in the project.
 The first is the stove model being promoted by GIZ Uganda and is constructed from clay, millet husk and water. Joseph Kirule from GIZ Uganda came to Nigeria in July 2015 and built the capacity of project staff and entrepreneurs on production, installation and maintenance of the stoves.

 The second is a stove model that is popular in Kenya and patterned after the Kenyan Jiko stove. The stove is made from pottery clay, pottery sand and water. Sospeter Nyoko from SOS Production Centre Kenya is currently in Katsina to build the capacity of project staff and entrepreneurs on production, installation and maintenance of the stoves.

3. Technical capacity building for 44 stove entrepreneurs on production, installation and maintenance of the GIZ Uganda stove model. This was carried out from July to August 2015. of the trained 44 entrepreneurs, 12 are women. Technical capacity building on the Kenyan stove model is scheduled between October and November 2015 after which the entrepreneurs will be provided with starter tools for both stove models to begin production and sales. The project plans to train and empower at least 100 entrepreneurs by the end of the second year.
4. Production of 400 FWR stoves and dissemination of 100 for user acceptance tests. The project is currently designing a dissemination and pricing mechanism that ensures stoves are sold at uniform prices across all the local government areas.
5. Advocacy and sensitization among various groups and stakeholders including the Governor’s Office, relevant MDAs, religious and traditional rulers, village groups and market associations.

The Regional Director of Market Development (Sub-Saharan Africa and South Asia) of Global Alliance for Clean Cookstoves, Arijit Basu visited the project in Katsina between October 7-9, 2015. He visited the production and training centres in Dutsi, Sandamu and Zango L.G.As and conducted an assessment of 14 households where user acceptance tests are currently ongoing. His interactions with some of the trained entrepreneurs and households revealed the following:

• The communities where the training centres are located are being made more visible.
• The households where user acceptance tests are currently ongoing are very excited with the new stoves. Almost all of them said the new stoves are convenient to use even during rainy season when collecting firewood is difficult. Most of them use to use 20 sticks of corn stalk per day but with the new stoves they use 6 sticks. Some said they spend an average of N200 per week on firewood but now they spend about N100 i.e half the price.
• The trained entrepreneurs are excited that they can now train others and earn income for the families.
Some of the women noted the following:
• The project has taken cognisance of women.
• The trained women can support their husbands with income from the sales of the stoves thus improving their livelihood.
• The new stoves are convenient to use in all season.
• It saves a lot of firewood.
• It has improved their health – no longer have red eyes as the new stove does not produce much smoke.
• Some said they used to fetch firewood 4 days in a week but with the new stove they now fetch only 2 days.
• The 3-stone stoves cause back ache because of frequent bending over to tend the fires but now with the new stove they do not experience any back ache.
The clean cookstoves intervention is based on the National Clean Cookstoves Market Development Programme developed for Nigeria. The project seeks to pilot the national programme in Katsina State by strengthening the enabling policy landscape within the state and local councils, support stove suppliers and ensure demand growth for clean cookstoves. It also has a measurable, verifiable and reportable gender indicators of success.