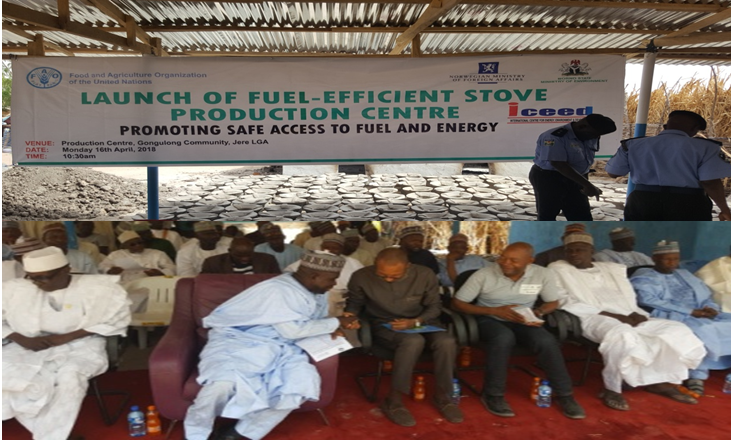 The International Centre for Energy, Environment and Development (ICEED) with funding from the Food and Agriculture Organisation (FAO) and the Norwegian Ministry of Foreign Affairs has established three (3) fuel-efficient cookstoves production/training centres in 3 Local Government Areas (LGAs) in Borno State. The centres are in Jere, Konduga and Maiduguri LGAs and have provided training to 100 people on technical and business aspects of fuel-efficient coookstoves production across the three L.G.As.

During the launch of the Centre in Gongulong community in Jere LGA on April 16, 2018, Mr. Macki Tall, FAO’s Deputy Country Representative noted that the measure was part of a comprehensive programme initiated by the organisation to reduce dependence on firewood, encourage development of alternative energies and provide sustainable livelihood to communities. According to Mr. Tall, people engaged in firewood collection were prone to attacks and abduction by Boko Haram insurgents, while women and children were exposed to eye and respiratory infections through inhalation of harmful firewood smoke. The project foresees to distribute at least 5,000 locally produced fuel-efficient stoves in the three LGAs to households with very limited access to firewood. This will help them to reduce the amount of firewood needed to meet their daily cooking need.

The Borno State Commissioner for Environment, Alhaji Kaka Shehu represented by Mala Barma, the Permanent Secretary in the ministry, stated that the forest in the state has been subjected to large scale degradation due to the strangulation of businesses and economic activities as a result of the activities of the insurgents over the past years. He remarked that this laudable initiative would go a long way in protecting forest resources in the state and noted that the state government has adopted proactive measures to discourage the use of firewood and fast track implementation of the Great Green Wall Project.

Some of the beneficiaries of the training programme also noted that the initiative would improve their social and economic conditions, improve energy access, increase time for women to engage in other income-generating activities and reduced pressure on forest resources.