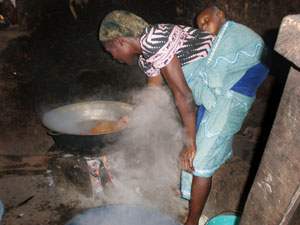 Cooking and eating — caring for our families at home, moving onto work, school and markets, and then back home again. These are universal rituals that fill our days and the lives of people the world over. And yet there is an unrecognized health threat lurking in the shadows of our most basic routines: air pollution.

It may appear as a faint haze on the urban horizon. Or it may be visible, as black and billowing smoke pouring out of the kitchen of a poor rural home. According to the latest World Health Organization data, air pollution causes over one third of deaths and disability from strokes, lung cancer, and chronic respiratory disease — and over a quarter of heart disease. All in all, it is responsible for one in every 8 deaths worldwide. About 7 million people every year.

Following the signing of the Paris Agreement, which makes a historic commitment to limit global temperature rise to “well below” 2⁰ C, we need to consider how to expedite climate actions. One of the fastest and most cost-effective ways for targeting the gradual and often imperceptible changes wrought by climate may be by tackling the visible: smog and haze over our kitchens and landscapes.

Around four million people die annually from such pollution, mostly women and children who spend the most time around the family cookstove — inhaling soot-filled smoke in a brew of other toxic and carcinogenic compounds.

Clean fuels such as biogas, ethanol, solar, LPG and cleaner-burning biomass cookstoves, provide a cost-effective way to reduce black carbon, CO2 emissions, while radically improving the health of the poor. In Nigeria, early results from a major new study show significant benefits to newborn health when pregnant women switch from biomass and kerosene, still used by 75% of the population, to cleaner-burning ethanol.

Currently, 98% of large cities (with populations over 100,000) in low and middle income countries have unhealthy air quality, according to new WHO data, as do 44% of high income cities- – including major European cities. Widespread reliance upon diesel vehicles — which emit black carbon along with carcinogens in their soot and smoke — is a crosscutting issue.

What is needed now is a global coalition of health, environment and climate actors, to expand awareness and drive change at the grassroots, where it will count.

The Climate and Clean Air Coalition to reduce Short-Lived Climate Pollutants (CCAC) is one such partnership involving over 50 countries and 61 UN agencies and NGOs. The CCAC is focusing on reducing black carbon and methane from urban transport and municipal waste, among other sources. The Global Alliance for Clean Cookstoves is helping to introduce cleaner cooking solutions in developing countries. Cities are now coming together to create collective action that protects and promotes health, reduces pollution and mitigates climate change.

WHO is accelerating its global monitoring of air pollution exposures; updating guidelines; consolidating evidence of health and climate synergies; and expanding advocacy about the health impacts of this modern-day scourge. The UN Secretary-General’s Every Woman Every Child movement has made combating indoor air pollution a key part of its updated Global Strategy for Women’s, Children’s and Adolescents’ Health for the next 15 years.

The 2030 Agenda for Sustainable Development aims to “substantially reduce” air pollution-related deaths by 2030, for access to clean energy in the home and for clean air in cities. We call upon the global community to set clear mechanisms for delivering that, aiming to drastically cut deaths from air pollution by one-half or more.

By cutting air pollutants from sources that also emit climate pollutants, we can reduce greenhouse gas emissions and turn the tide on the epidemic of noncommunicable diseases. We can translate the Paris Agreement into one of the strongest public health agreements of our time.

The solutions exist. We need to spread the word about their health and environment benefits, and catalyse political action. Fast action to tackle air pollution can’t come soon enough – for the health of our children and the planet.