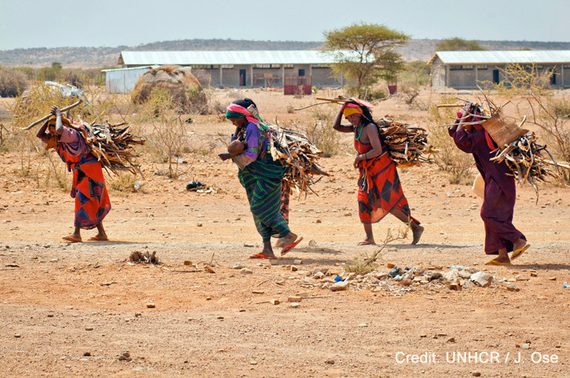 More than 59 million people are currently displaced from their homes due to conflict, war, and disaster. They leave home with few possessions, and often, in fear of their lives.

While millions of refugees receive food from humanitarian agencies, the food still needs to be cooked before it can be eaten. Yet without access to modern cookstoves and fuels, women and children must risk their safety, health, and sometimes their lives, to search for and collect firewood in order to cook over smoky, polluting open fires that damage health. As we commemorate World Refugee Day, now is the time to raise awareness about this critical issue and to encourage decision makers to address the urgent need for increased access to cleaner and more efficient cookstoves and fuels and to help ensure the dignity and safety of refugees around the world.

Displaced women often must walk for hours to find firewood and carry loads of 20 kg or more back to camp, which puts them at risk for physical and sexual attack, dehydration, and physical injury. In fact, a 2014 UNHCR assessment in Chad found that 42% of refugee households experienced incidents of assault, attempted rape, rape, or other forms of sexual gender based violence during firewood collection over a six month period. At night, lack of access to lighting further increases women’s vulnerability when navigating camps to use latrines and other services.

Women and children in refugee camps are also exposed to health risks, including respiratory infections from smoke produced by inefficient stoves and fuels. A review in the Journal of Conflict and Health in 2010 stated that acute respiratory infections (ARIs) such as pneumonia are the leading cause of mortality among children under five worldwide. Yet they receive comparatively little attention in humanitarian relief policies despite the fact that in crisis settings the burden of ARIs tends to be exponentially greater than in non-crisis settings. In Nepal, for example, ARI mortality rates were roughly 10-17 times higher among refugee populations than among those in non-crisis settings. In Burundi, mortality rates from ARI were four times higher among refugees than their non-displaced peers.

Lack of access to cleaner and more fuel-efficient cooking technologies also has direct consequences on food security in crisis settings. In camps in North Darfur, 80% of internally displaced persons interviewed reported selling food from their World Food Program ration to buy firewood, and on average they missed 3 meals a week when they had food but lacked cooking fuel.

So what is being done to address these issues?

The Global Alliance for Clean Cookstoves (Alliance) and the UN High Commissioner for Refugees (UNHCR) are working together with the Safe Access for Fuel & Energy (SAFE) Humanitarian Working Group to develop and implement comprehensive programs in refugee camps that reduce fuel usage and emissions by improving access to cleaner and more fuel-efficient cookstoves and renewable energy products such as solar lanterns and solar home systems. The Alliance and UNHCR are conducting ongoing research to better monitor and evaluate the impacts of energy access programming, and are training humanitarian staff on how identify refugees’ energy needs, plan, and implement high-quality energy programs.

What we need now is for all of you to join us in this effort.

Humanitarian staff should include questions on household energy needs in rapid assessments, and when energy needs are expressed, address these comprehensively within programs.

The general public can support this effort by donating or advocating on social media in support of humanitarian energy access. Follow @SafeFuelEnergy, @cookstoves,@UNHCREnv and @iceednigeria on Twitter. Research the issue on www.safefuelandenergy.org and on the Alliance’s and UNHCR’s humanitarian energy pages.

Policy makers and donors can support the effort by recognizing the importance of energy access in ensuring the dignity and safety of refugees, and by prioritizing energy access in humanitarian policies and funding mechanisms, which should be key priorities as global leaders work this year to finalize the Sustainable Development Goals.

Together we can improve energy access for refugees and other displaced populations, and in doing so we can improve the health, safety, food security, and livelihoods of millions of people.

Culled from Huffington Post
Written by Alexander Aleinikoff, The Deputy High Commissioner of the United Nations High Commission for Refugees and Radha Muthiah, CEO of the Global Alliance for Clean Cookstoves.